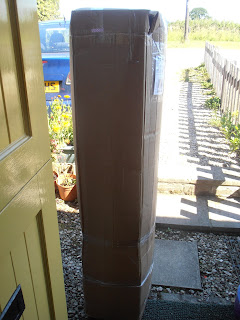 Don't you love it when a delivery comes? Especially a BIG one. So big I had to leave it on the doorstep whilst I went to get the sack truck from down the garden! 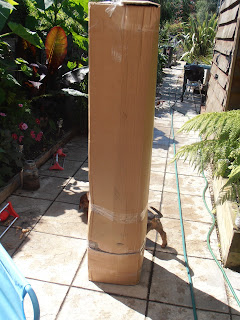 Then wheeled it through the house, threatened the dog with death if he cocked his leg on it! 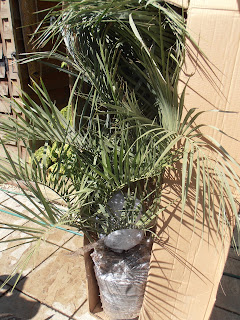 then started to unpack. I'm sure I only ordered a plant in a 25lt pot!! 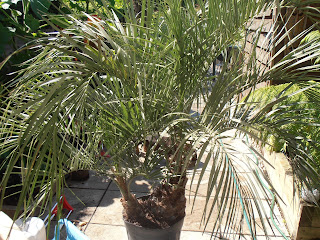 Well the pot is 25 lt, but the plant is way beyond that, a Butia Catarinensis, double trunk too. It is far bigger than I expected, ordered from Hardy Palms which is only down the road in Bristol.  It is native to Southern Brazil and is small compared to Butia capitata (now B odorata) apparently the trunk rarely exceeds 6 inches width and 3 m in height, the span rarely exceeds 2 m, which is perfect for my garden. It is considerably hardy, good for me, and will make the perfect palm for the 'small European garden', well I hope thats me too.

Compared to my Butia Capitata this is HUGE! 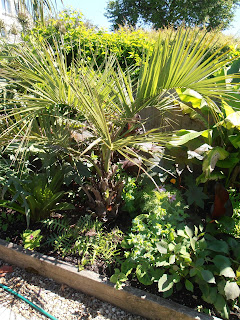 my Butia, been in the garden 3 years now!! The fronds are stiffer, I hope it will get bigger but they are notoriously slow growing.

So the new plant is going somewhere here 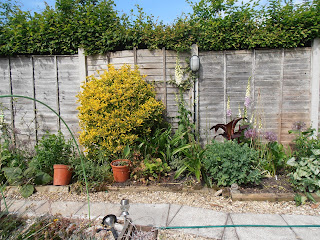 opposite the Arid bed. Since my friends Mark & Gaz's garden from Alternative Eden was in the Gardeners World magazine, 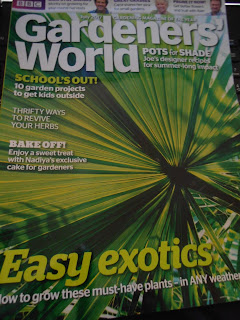 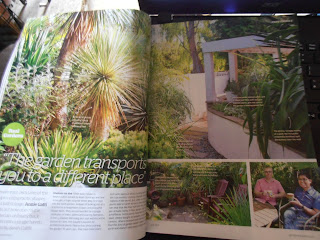 I have decided I need to sort myself out. They both work full time and have the most amazing garden, I am sure they do lots and lots of work to keep it to the standard they have got it too. But the majority of there plants are hardy!!! I can't keep lugging plants in and out of the greenhouse.
This last winter was the worst for me as I lost 5 large bananas, a staple in my garden. I think it was because I had a new heater that actually kept the greenhouse at a steady 10c whereas my old heaters I am certain only managed 5c.

So to add to my Loquat, Trachycarpus x 2, Brahea armata, Schefflera taiwaniana, Chamerops humilis x 2, Phormium (of course), Cardoon,  Dicksonia Antarctica x 2, Paulownia x 3, Rheum,  Tetrapanax Papyrifera 'Rex' and a Fig!.  These are what I consider the 'big' plants, looks a lot but it isn't.
I don't mind a few Ensetes, and of course Alocasia and Colocasia. I underplant with Dahlias, Cleomes (love these) Cosmos, foxgloves, not very exotic but I love them.
What I really would love would be some bamboo, but I am terrified it would take off, my garden is only 13ft wide and I have 'OK' neighbours, but I think if bamboo started arriving in there garden I would not here the last of it!

So sometime this year I shall dig the majority of this bed out, I need to go through the soil with a fine tooth comb to try and remove all the bind weed (lol!) then replant, some of the plants will stay, but I would like this bed to be a good foil for the arid bed, hence the new palm, which has really excited and inspired me.