It is a while since I blogged, well blogged here that is.  I, as I have mentioned, I have now started my Million Step Challenge and started a blog to recall my journey, something I can look back on and see what and how I achieved it.

It has been so hot that gardening has taken a bit of a back seat, watering has been the main priority, fortunately we do not have a hosepipe ban, but to help I have stopped using a sprinkler.

Back in May 2015 the Arid bed looked like this 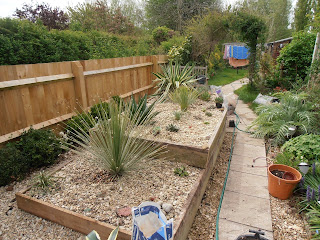 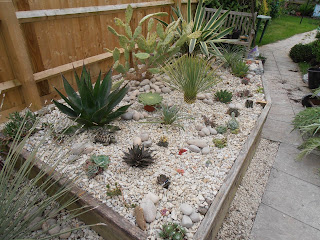 How much has changed in 3 years, it has filled out so much 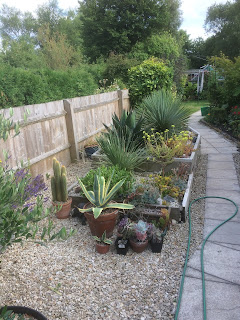 The Agave Montana is A-M-A-Z-I-N-G! you can really see just how big it has grown, when it was first planted it was no where near the edge of the bed, now it has reached the edge and overhangs it. 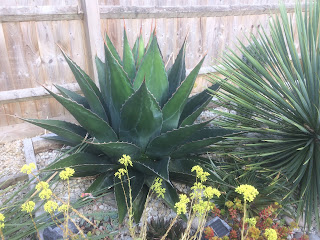 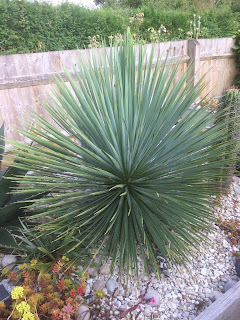 This end has had the most changes, taking out the Aloe Striatula has left a bit of a hole but I purchased a very small Agave Americana which I planted and looking at it now, knowing how big it can get I think I shall move it a bit more to the right. 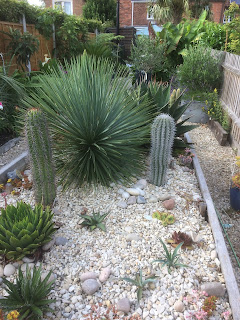 As much as I love this bed I have seen one which I would truly love in my garden. This belongs to a friend who lives near Poole, Dorset a far better climate than I have. 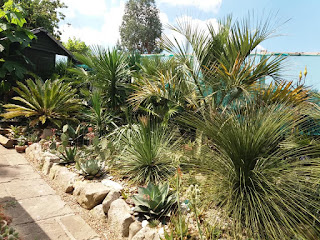 What I love about this, is it looks far more natural. I know its wider than mine, and he is on a hill, plus he is also a builder, so constructs a most magnificent shelter for this to over winter it. I think that is where I would struggle.
When we rebuild the edge surrounding mine, later in the year, I have found a gadget which I hope to be able to incorporate into the build to be able to make erecting the winter shelter easier. I do realise I can't have the height of the plants, that is in his bed, as my garden is far more exposed and my shelter would probably take flight in the winter.
But maybe what I could possibly incorporate is some of the large rocks at the lower edge of my bed but then that would probably look odd, if it swapped to the wood that is currently used, Decisions, decisions.

Now the Phormium has gone I have tidied up and planted up the area, I am still waiting for my Solar pond pump which will run the ball pool. 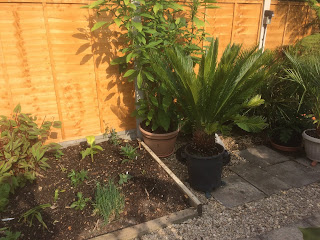 Everything is a bit diddy, but will grow in time. 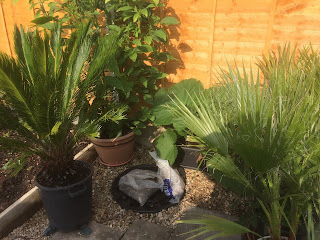 We aren't quite sure what to do with this area, so whilst deciding we have gathered all the potted plants here. Makes them easier to water too. 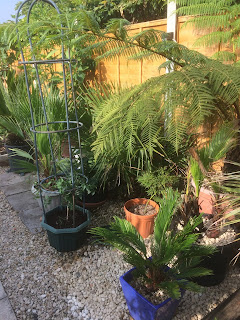 So thats what has been going on here this past month.